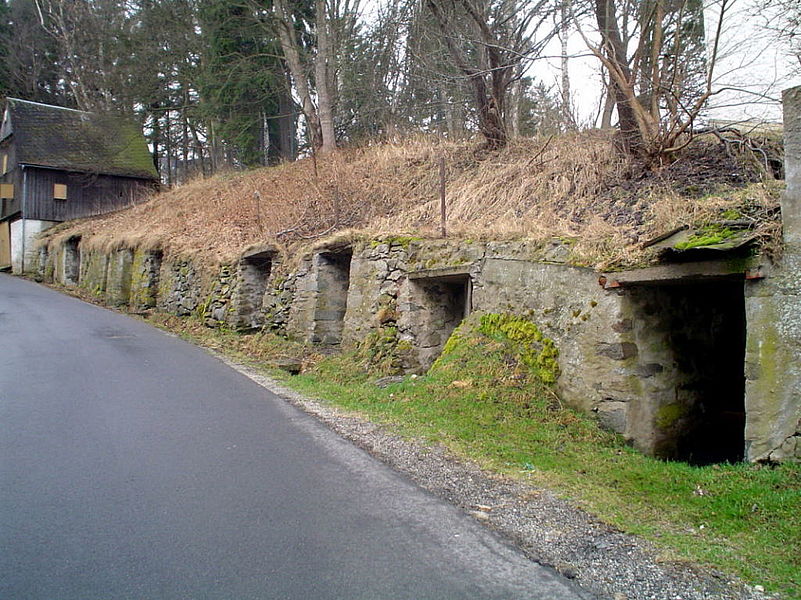 Relics of former times are the hollow paths, called “Hohlweg”, in the Fichtelgebirge,
which had been cut into the relief by centuries of wagon use. If they were close to
settlements, such cuts into the landscape were often used to construct earth and rock
cellars. They were built to store potatoes, beets, beer and meat. The edges of the
hollow paths are usually covered with native, site-specific trees and bushes that form
hedges. These semi-natural structures form a connection between open landscape
and settlement. In this sense, they are to be seen as a kind of transitional structure
(e.g. “Birnbaumgasse” at the Wunsiedel “Katharinenberg”).

Hollow paths are a paradise of native hedge birds such as the dunnock, wren,
warblers etc. Older trees with their fissures offer summer quarters for bats.

The earth and rock cellars in the hollow paths are important ecological structural
elements of nature conservation and also a symbol of our building traditions and
stonemasonry. And as artificially created caves, they give evidence of the geological
conditions of the rocky landscape of the Fichtelgebirge. Rock cellars were important
for storing food, e.g. potatoes. They are often abandoned, partly derelict monuments
of our agricultural landscape. Cellars, that are hardly used any more, are known
habitats for animals (winter refuge for bats) and often described as small biotopes in
semi-natural environments all over Bavaria. The Kellerberg mountain near
Weißenstadt with roughly 130 cellars is of more than local significance in our area.
And in the 50 rock cellars in the Kellergasse at the edge of Wunsiedel, particularly
many kinds of wintering bats have been recorded with the FFH species barbastelle,
greater mouse-eared bat and Bechstein’s bat. The row of cellars at the Hohenbucher
Weg in Marktleuthen and the cellar in the Hohe Gasse Dörflas are under monument
protection.