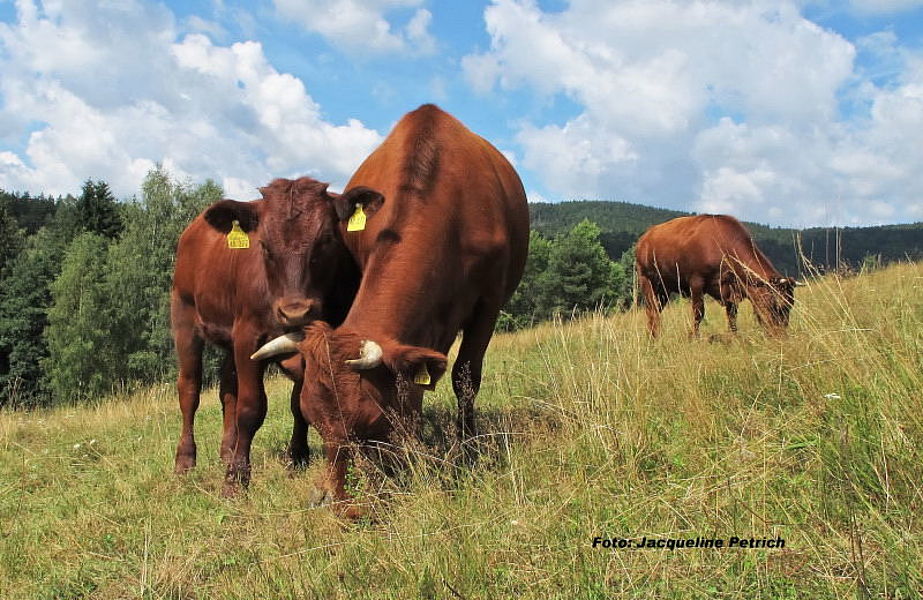 To maintain our richly structured landscapes in the Fichtelgebirge with its high
proportion of biotopes by grazing them with sheep, goats, cattle or horses – this
concept has accompanied the work in nature reserve in theory and in practice.
The Fichtelgebirge Nature Reserve here specially focuses on an endangered cattle
breed: the “Sechsämter” cattle – a local, unfortunately extinct red cattle breed of this
region.
After 1984, the term Red Highland Cattle combined some old, robust, solid red
domestic cattle which occurred in the lower mountain ranges in Central Europe and
which only just escaped extinction. The origins can be traced back to the Celtic
period. By cross-breeding with other red cattle breeds in the European
neighbourhood, the local red cattle breeds were created which are subdivided into
highland and lowland cattle according to their geographic origin.

In the Fichtelgebirge, this breed was a highland cattle called “Sechsämter” or
“Vogtländer” cattle. Over the centuries, reddish-brown cattle have been bred which
are ideally adapted to the mountainous region. What was called “Sechsämter” cattle,
was a cattle breed small in stature with a strong neck and a broad shoulder and back.
It could well be put into harness, was undemanding and a good feed converter of the
often acidic feed on the meadows; its beef was known to be flavourful. By the sixties
of the past century, this robust “all-purpose cattle breed” had been complete replaced
by higher-performance, mottled dairy breeds and breeds for fattening.
With the loss of the “red” cow in the Fichtelgebirge, its good qualities were also lost –
fertility, a good constitution and longevity, flavourful meat, tolerance of acidic pasture.
Qualities which are again in demand today in view of current topics – the preservation
of our cultural landscape and a verifiable high-quality regional product.
30 years later, committed breeders started to arduously re-establish this cattle breed
from stock remnants from Saxony, Hesse and a conservation herd in Prague. From a
pilot project of landscape conservation by the agricultural administration and the
Landesbund für Vogelschutz in Bayern e.V. (State Association for the Protection of
Birds in Bavaria e.V.) with the red cattle in the Upper Palatinate Forest, several herds
have been established in adjacent regions. From this stock, the red cattle herds shall
be newly established in the Fichtelgebirge.