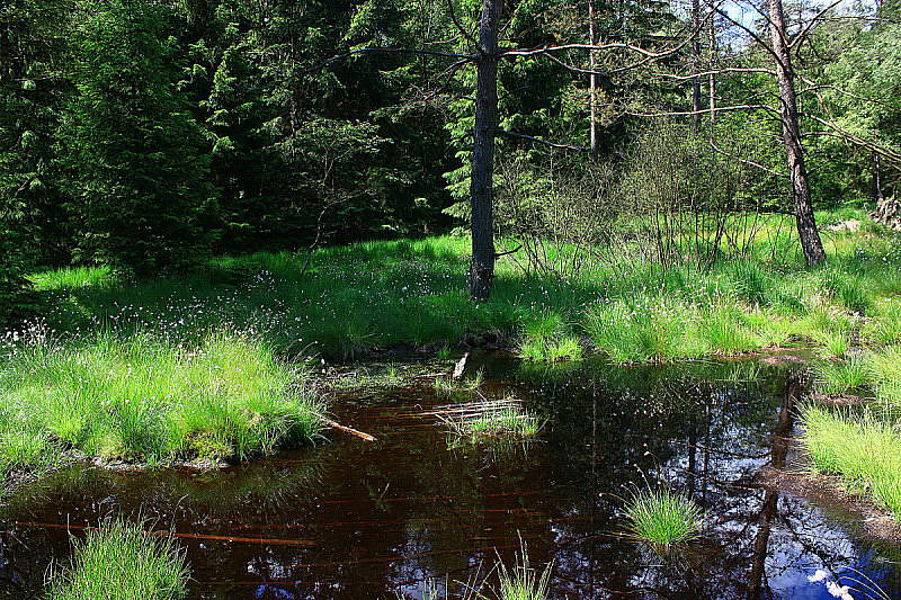 Moors have always been mystical places. Many stories are told of fairies and goblins,
wild huntsmen and the “Moosweiblein”, a good moss fairy, about these numerous
and inaccessible areas in the Fichtelgebirge. The largest moors in Northern Bavaria
are located in the Fichtelgebirge Nature Reserve. Among the best known and most
significant are the Zeitelmoos moor between Wunsiedel and Röslau, the Häuselloh
moor near Selb, the Torfmoorhölle moor near Weißenstadt and the Ehewald moor
between Tröstau and Nagel. But it is not only at valley elevations that moors are
found. Different types of moors were also created by high rainfalls and ground that is
water impermeable in wet dips on the mountains. Among those special forms are
marshy slopes and spring bogs, for example the Heinersbachquellmoor or the moor
at the Backöfele underneath the Schneeberg summit, which is at a height of 1000 m
above sea level.
But they all have in common that they host a multitude of plants and animals adapted
to these particular habitats. Peat moss forms the original peat layer. It grows only few
millimetres per year. So if the peat layers have a thickness of several metres, one
can easily calculate that these moors and the individual living moss plants are often
several thousand years old. Since the acid, nutrient-poor moor soils only provide few
nutrients, the Common Sundew has developed an extraordinary strategy for survival.
With sticky “droplets of sundew” on its leaves, it catches flies and other careless
insects and digests them. In addition to this carnivorous plant, there are further
botanical specialties in the moors of the Fichtelgebirge: Moorspirken trees (a special
mountain pine), crowberry, wild cranberry and the hare’s-tail cottongrass are other
typical plants of these special landscapes and habitats.
Among the animals, the dragonflies occur in great abundance around the moors.
Common European adders enjoy the warm forest edges along the moors to bask in
the sun and go hunting in the adjoining wet marshes and moors for frogs and other
amphibians. The blue moor frog can be found only in few regions. The moors with
their sparse forests still offer good living conditions for wood grouse, one of the last
four populations in Bavaria. Black and white storks also go hunting on the marshes
and moors.
In former times, the moors in the Fichtelgebirge were drained. As late as the 1950ies,
the dried peat was used as an important and cheap burning material. The meadows
in the moors were mown and the hard stalks were used as bedding in the stables.
Today, attempts are made to conserve the marshes and re-wet the moors so that the
sensitive habitat can continue in its growth without interference. The Fichtelgebirge
Nature Reserve supports the landowners in re-naturalisation and maintenance
measures by its preservation of the countryside. Today, the protection of the moors is
more important than ever. Studies all over the world show that moors belong to the
earth’s most effective CO² reservoirs. Atmospheric carbon is bound in them and
stored for thousands of years. Thus, intact moors make an invaluable contribution to
climate protection.